Hope you all are staying cool these days because I'm swimming in sweat right now :) and  I haven't even been out running... I've been working on my Craftsy BOM blocks for August which feature stars. I've made the  Ohio star block before so I  though it would be no challenge... EXCEPT! Amy is using a method where you have to trim the hourglass units to size since there's a little room to play with. I like this method because it could be very precise. I can't remember if in her demonstration she mentions that when you trim you don't only have to put the 45 degree mark on the bias angle, but you need to make sure that the 2 1/4 mark is in the middle of your block. Otherwise you'll end up like me cutting off the points of your block. I realized this after trimming all 4 of them, but thought what the heck... I'm not making a whole quilt out of this one block, so I'll just let it go. I started to sew the rows together, but didn't quiet get to the end when I realized I still had to take a shower before going to bed. It was 10 o'clock already and I decided not to finish the block that evening. Yesterday morning when I  got to it somehow the wind or the kitties knocked the blocks on the floor. I moved my chair without noticing this and accidentally put the wheels on top of the fallen pieces. It was hours before I realized what happened. When I looked at the fabric it was obvious that I'll have to re-make them since they had grease all over them from the wheels. I believe it was a sign to teach me that it's NOT OK when the points are cut off because of a mistake. I re-made the units and now it looks alright.

Here it is in full glory, the Ohio Star block: 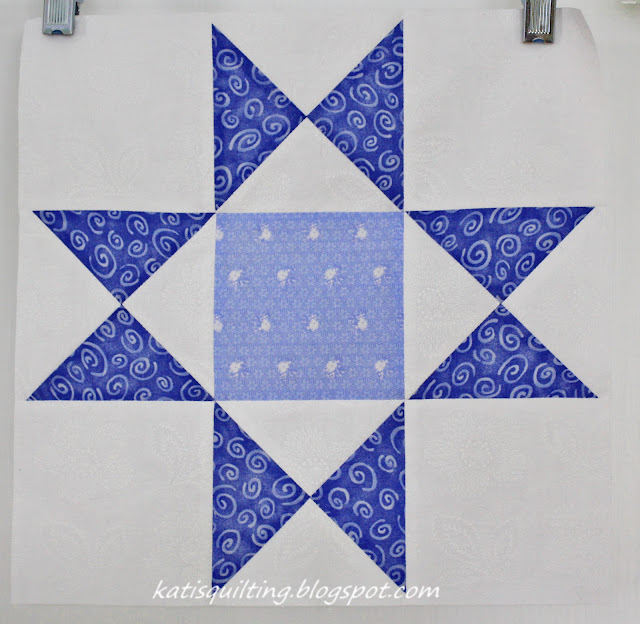 Now... the Double Star block gave me a  little trouble. I decided to use my freshly bought Connecting Thread blue thread for the blocks which is a little bit thicker than my Aurifil. I had to make 12 flying geese units for this block. We used the method when you have to draw a line across the square and sew on the  line to get the flying geese unit. Now usually when I have a thread like I was using which is a little thicker than usual I sew a hair closer to the corner next to the line so when I fold the background fabric back it goes exactly to the corner. Smartly I didn't use this method for these and I  payed for it after pressing the units since I had to re-sew most of them. The block came out OK, it could be better, but again since I only made one block I'm not going to fuss over it. I don't think I ever want to make a whole quilt with this block since it took FOREVER to cut out all the pieces and then to make everything come together. I may have been a little faster if I did things as I was used to as oppose to the instructions... 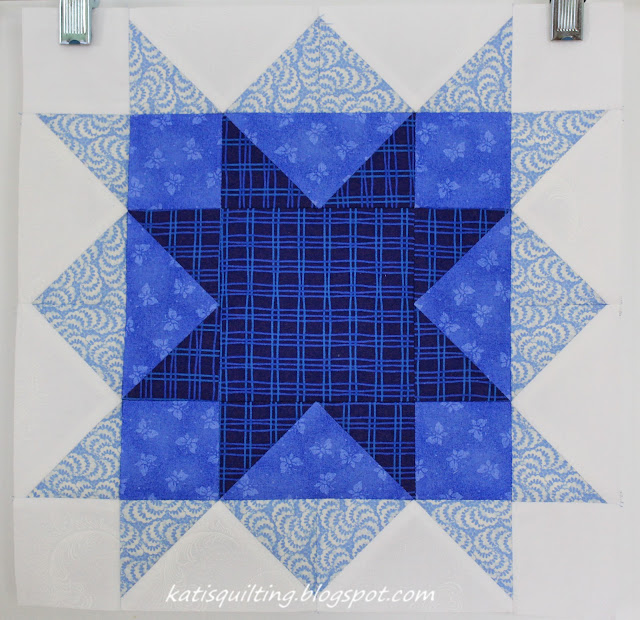 Finally a time lapse video about  our hike up to the  top of Mount  Snow in Vermont. Click on the picture and wait until  it starts moving, it's pretty cool!

That's all for Today, next I'll baste my Dresden quilt and quilt it.