It's time for the Blogger's Quilt Festival again, hosted by the super Amy Ellis @amyscreativeside.com. This year I'm entering the Dresden Quilt I made for my friend's daughter's 1st Birthday. It's made with pink and white fabrics so I will enter it in the two color quilts category. If you really like the quilt I'd appreciate your nomination :)
I finished the quilt in August, 2012. It was machine pieced, hand appliqued, and machine quilted by me. The little cute pinwheels in the corners are 3-D which I'm really proud of :) I really loved making this quilt and even did a tutorial how to do the Dresden plates block and a perfect circle. The blocks are 12" finished, there are 2" sashings with cornerstones, and the borders measure 4". The finished size of the quilt is 48" x 60".

Here are the pictures I took, enjoy! 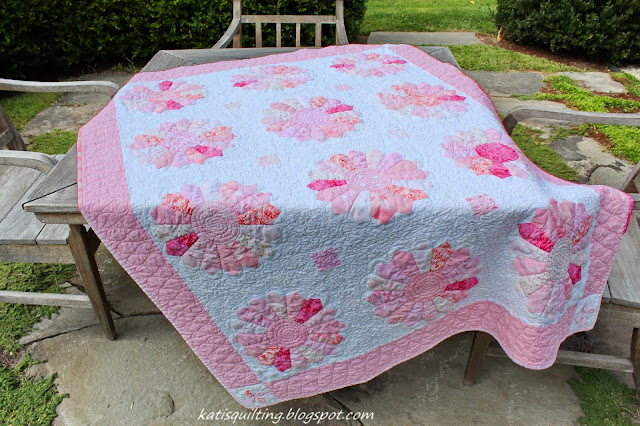 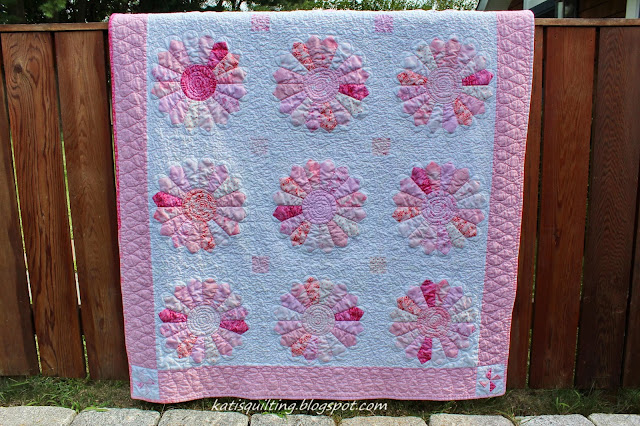 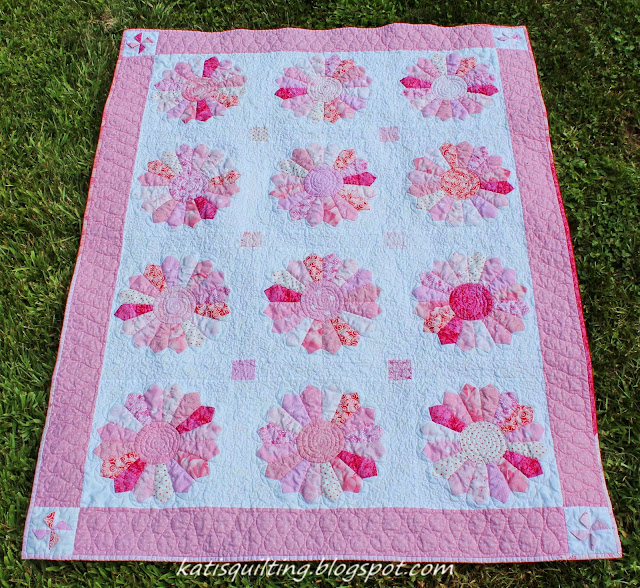 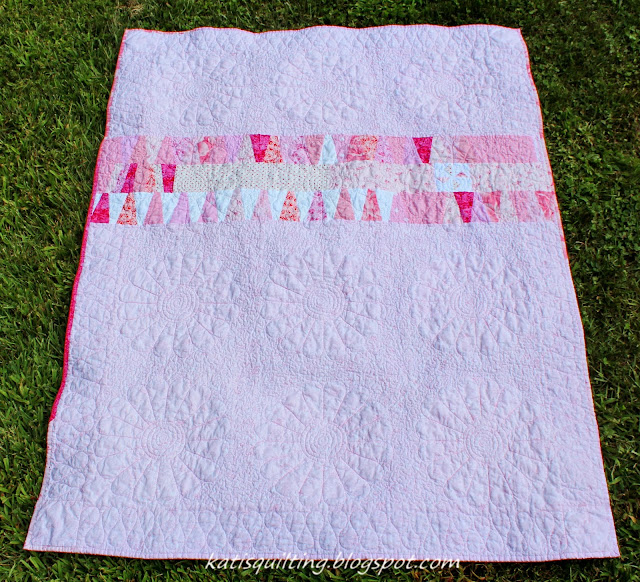 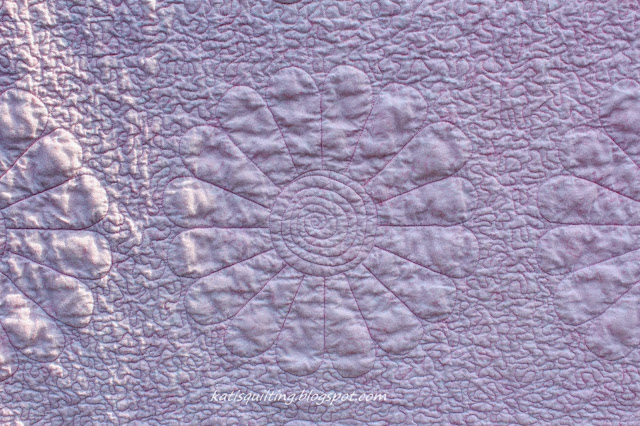 Thank you so much for looking and hope I'll see you quilt in there, too!

Yes, that's right! With my yesterday afternoon marathon sewing I am all caught up with the Lucky Stars BOM 2013. Hurray! :)

The block for October is Chaos Star: 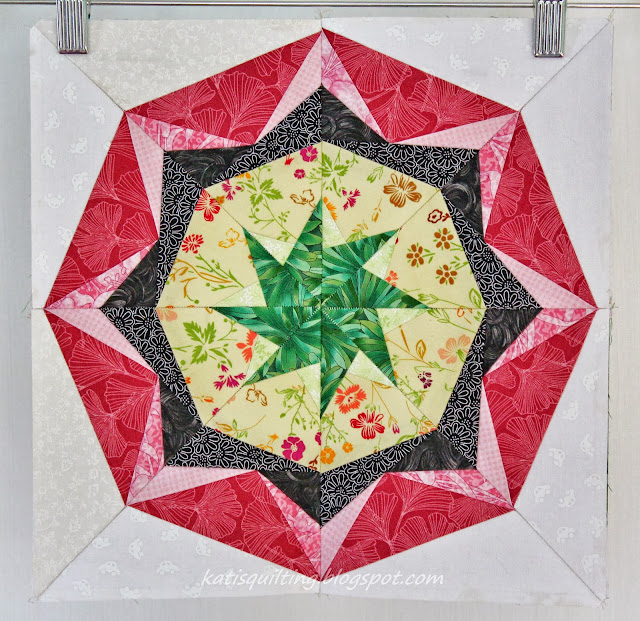 Uh-huh, the name says it all. When I printed the pattern and looked at the fabric requirements my eyes just popped out :) 9 different fabrics for each section. That means 72 pieces in this 1 block. It took me a while, but it was all worth it. I had all the fabrics picked and cut out to shapes on Saturday, so all that was left was sewing for yesterday. I'm glad I'm caught up so I can move on to other projects, like finishing quilting and assembling my Christmas quilt, and I'd like to start the Chain of Stars mystery quilt I signed up on Craftsy. I'd watched a few lessons and selected the fabrics I wanted to use already, but have not cut anything just yet.

What are you working on?

Hope you're having as nice a day as we do here in the Northeast!

I'm linking up with  Marelize at Stitch by Stitch for Anything Goes Monday.

Posted by Kati from Kati's Quilting at 2:51 PM 5 comments:


Since my last post I finished another block for the Lucky Stars BOM. If you're interested in joining Elizabeth has next year's BOM up on her website already and you can join 2013 and 2014 for a discounted price. I really like her designs, sometimes change the colors when I don't have the fabrics She's using in her sample.

The star of September is the Windmill Star 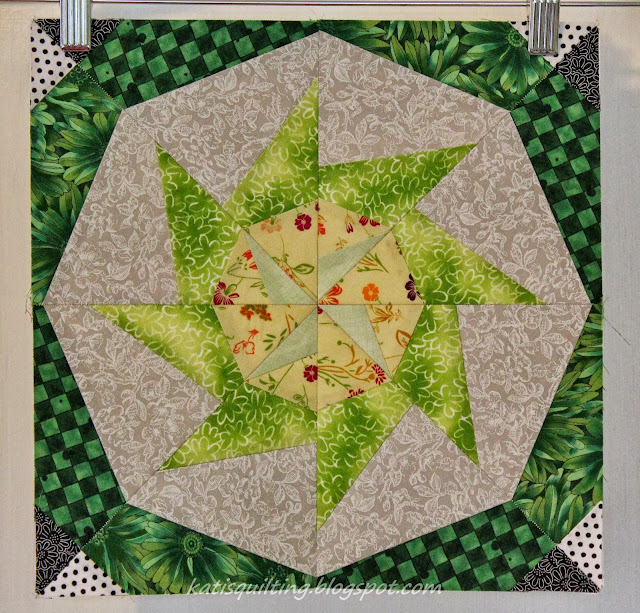 I had a busy week so it took me a few nights since I could only work on it minutes at the time. It's finished, and that's what counts :) I'll be picking out the fabrics for the October block and then I'll be starting a new quilt top. The boys are fishing this afternoon and I will have a few hours of sewing time before they return.

Since last week I also finished 2 books. The first one is The Lost Garden by Helen Humphreys. The story is set in 1941 in England while WVII is going on. I have to admit the story was a bit slow (specially after those mystery stories I was reading lately) and I was eager to find out what happens with the lady it is about. I really liked reading about restoring gardens, it took me to a different place while I was reading.
The other one was a quilting novel called The Quilter's Apprentice by Jennifer Chiaverini. What a lovely story! Loving hand piecing myself I really enjoyed how things went along. I only read one other book written by her, but I will buy all the Elm Creek Novels in sequence this time :) This story is set in modern days and has flashbacks about a quilter's life. I can highly recommend it to any quilter who enjoys reading.
Since I'm on a roll I will be reading the last book in the Chet and Bernie series I mentioned last time. It's called To Fetch a Thief.

Now I'm off to pick those fabrics while I can!

Ahhh,so good to be back!

I am finally back after a long hiatus and it feels great!
As some of you know I had computer problems and finally my laptop died (R.I.P). I tried to keep up with reading the blogs I follow on my tablet, but it didn't always work. It gets frustrating after a while when you're trying to leave a comment and make a mistake, try to go back to correct it and then you pull the page down too much and your comment disappears when it goes back to the previous page. I couldn't sync my camera with the tablet so uploading photos was out of the picture. And what is a blog post without photos, right? I had a friend tweeting her confession which said She doesn't always read the blog posts when they have no pictures. Boo-hoo :))
I used my computer-less time for reading some books which I really enjoyed. I started a series of books by accident when I was watching my friend's house while they were on vacation and I found a book where the title was Thereby hangs a tail... There's a dog on the cover and I know She loves dogs. I gave it a try and it was a nice surprise. Specially when I found out that it was a series of mysteries. Since then I bought the rest of the series and been reading all of them. Of course out of order, because that's how I roll :)) The stories are not building on each other so each book makes sense on its own. If you like mystery and humor from a dog point of view I can highly recommend them. They were written by Spencer Quinn.
I was not sewing terribly too much, but made progress here and there.
I was catching up on my Lucky Star BOM blocks, I made a few of them in about 2 days. They're all paper pieced and take quiet a while to make. 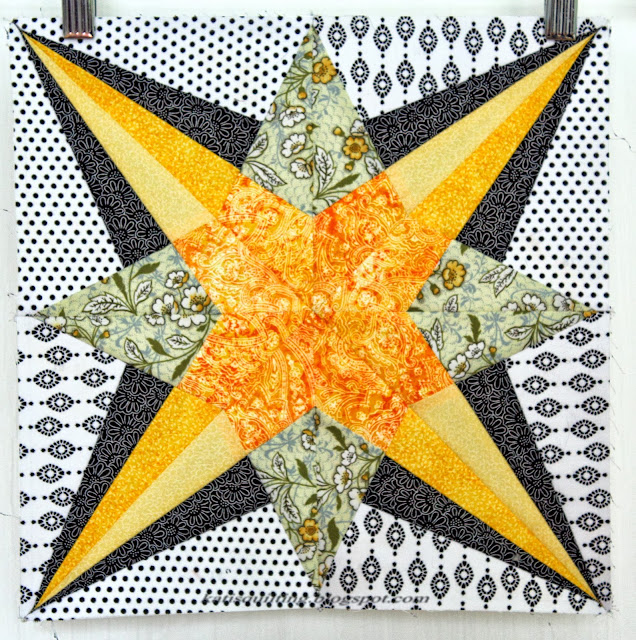 The one for June is Sunlight Star 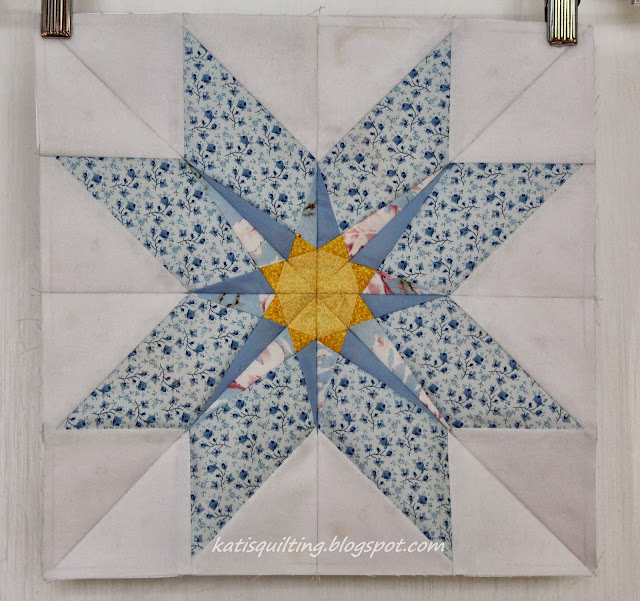 And July is Dulcet Star 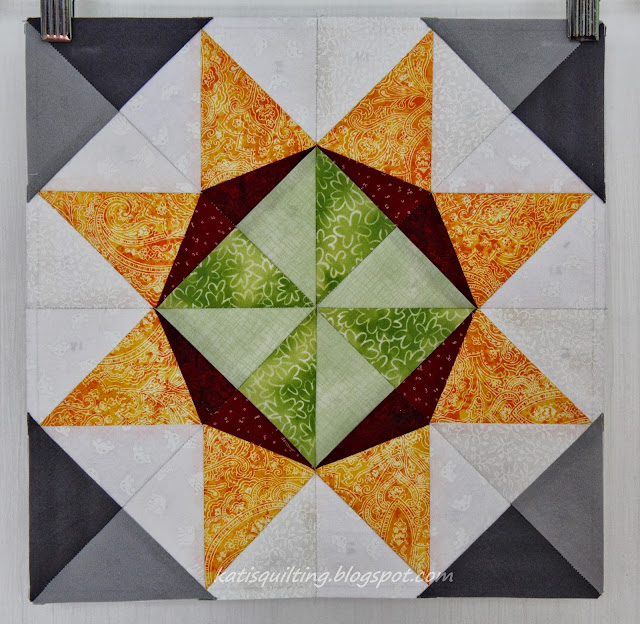 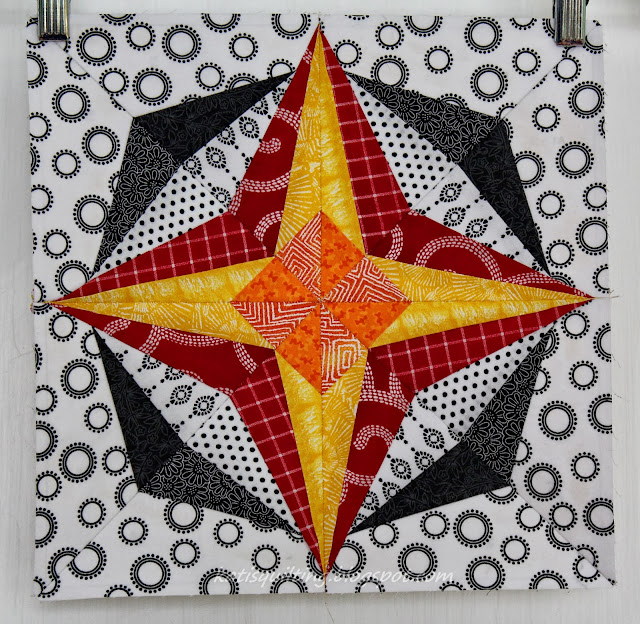 Note:The spots that look like dirt are glue underneath which will come off once I removed the paper which is after the blocks are connected into a quilt top.
I also finished piecing the top for my Easy Street quilt. I have not found a name for it yet. It was funny when I wanted to start piecing the rest of the blocks together and my machine didn't want to wind the bobbin. I haven't used that machine since maybe Spring so it wasn't surprising how it resented me. I gave it a VERY good cleaning and it was working perfectly again.
I know I will be quilting it and bought a special wool batting for it which I can't wait to try since I've never worked with wool. I just need a big enough space to spread it out for basting. Someone suggested to go down to the local church, but I'm not sure how they would receive my request since I don't belong to any of them. We're not big on church in this house. Do you think it's not too embarrassing to ask? I would appreciate any feedback on that.

I'm also planning on making the September and October paper pieced blocks so those pictures are going to be coming soon. Right now I'm working on the binding on Easy Street which you can guess what color it's gonna be :))

Oh, and I was asked to make some baby blankets for a local co-op where the blanket maker moved away and they don't have anybody to take her place. I ordered these super cute fabrics from the Fatquarter shop and they were here in 2 days. I am really happy with how they look. What would be a good backing besides flannel? I'm just making the simple pillowcase style where they're sewn right sides together and then turned inside out and stitched on the edge with maybe a zigzag or some kind of decorative stitch.

That's all for now, I'll be back soon with the September block.