While I was away from the blog I kind of didn't feel like sewing, but was reading instead. I made progress on my Game of Thrones series (still on book 4, but hit 65% which is a big step) and read Between Heaven and Texas by Marie Bostwick. I really loved the book, it made me cry several times. I mostly read at home so it was not a problem. At least the kitties didn't complain :))) It had such a huge impact on me that days later I was still thinking about it.

I made a new recipe for Memorial Day weekend, it's a cheddar-chive scone, recipe provided by epicurious.com. (What you can see on the picture is 1 batch.) 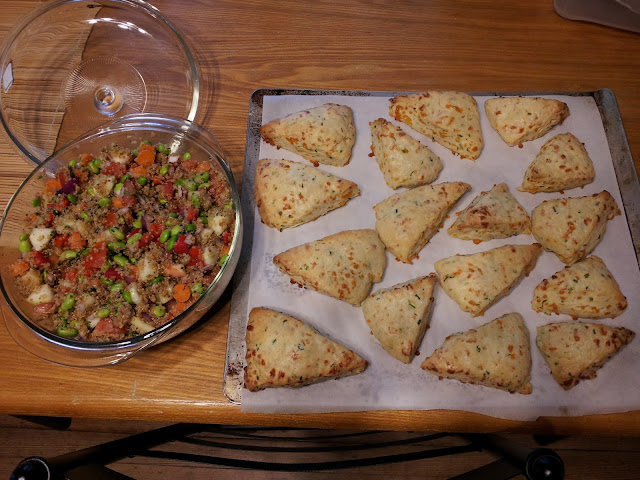 It is a super easy recipe to make, I made a double batch, taking half to the party, and left half of it at home. I even put some in the freezer, they freeze very well. The salad on the left is called Fiesta quinoa salad. If you need the recipe for that let me know and I can email it to you.

I also whipped up a shopping bag from plain duck cloth and thinking about decorating it with some embroidery. I went to the local quilt show a month ago and saw a quilt that I'm still thinking about. It had a nice pattern with lazy daisy stitches (?) and I really liked that. Here's what it looked like: 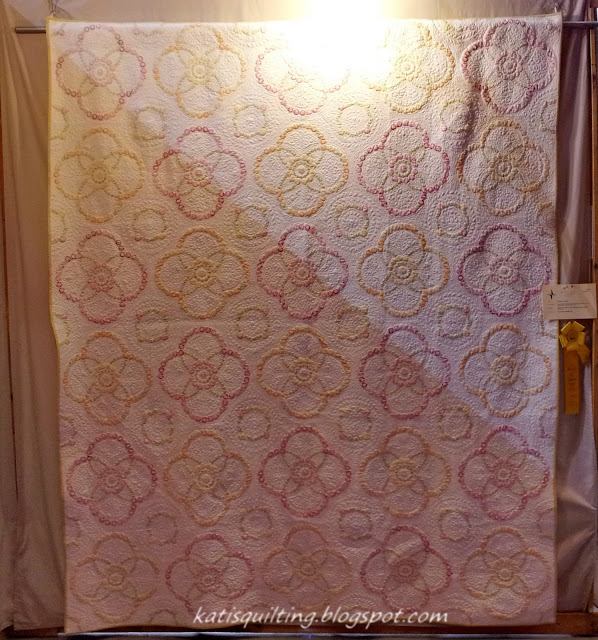 And the bag itself: 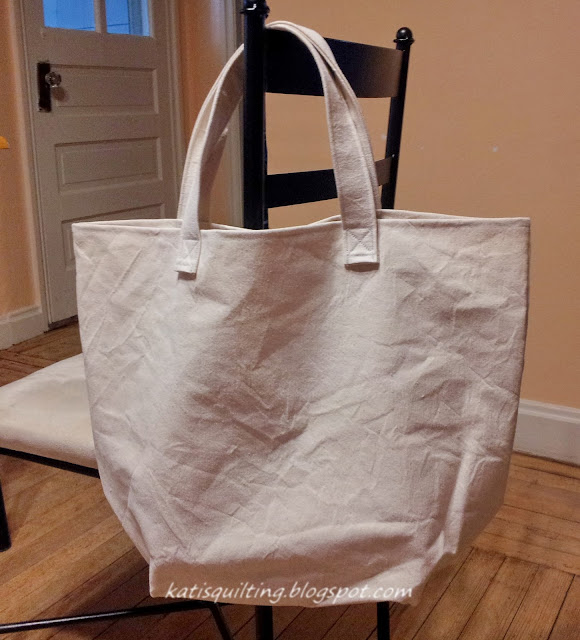 Last weekend we visited the Flea Market which we decided will do regularly, and I mean about once a month. It was the hottest day of the season with a whopping 91F for the highest so we finished fairly quickly. No worries, I was wearing plenty of sunscreen and didn't get any sunburn. Regretted not wearing a baseball cap at least, but there's always next time, right?
There were a few things we looked at, and right at the beginning I found and African person selling African textiles and my Fiance pointed out he had wooden stamps. I was pumped. He wanted $5 for each, or $20 for 5 of them which option I took. I started to dig into the basket and my hands were black by the time I made up my mind. There were so many to chose from and I tried to limit my selection to the ones that were not damaged at the carvings.

I selected these and I'm really pleased with my choice: 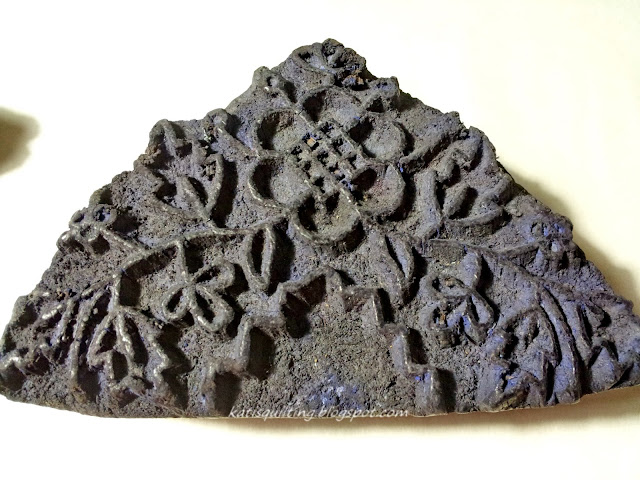 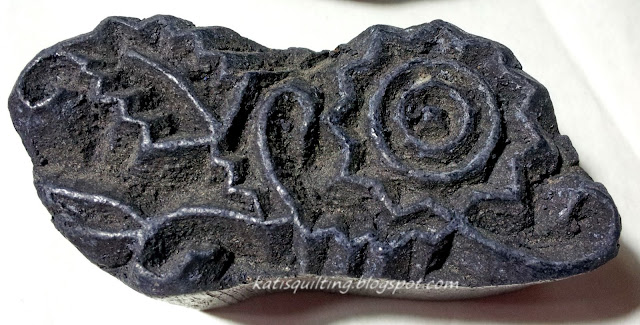 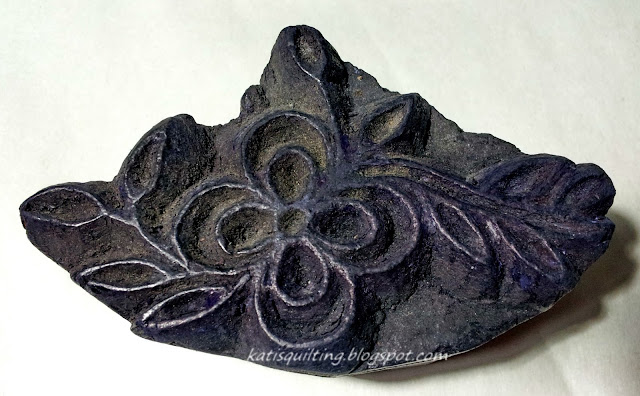 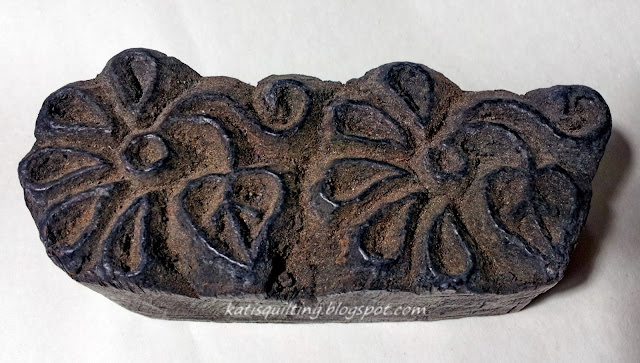 I also spotted a marvelous embroidered sun umbrella at a booth which about took my breath away. Fiance was kind of ahead of me already, but I just had to stop to snap a picture from up-close and personal :) I only had my phone, but I think it gives back the inspiration that I just had with all the colors and texture.
Isn't it stunning? The only mistake I made was not asking for the price. Maybe next time it'll still be there! There's always hope... 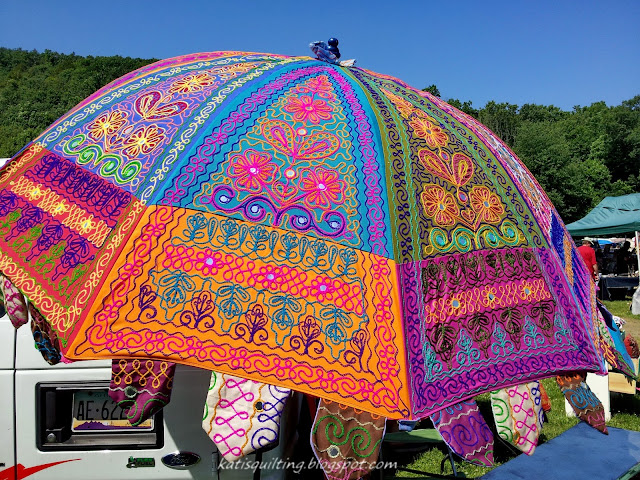 My sewing room needs a serious clean up because I just can't get myself working on anything right now. I wrote down my project on post-it notes and stuck it on the box in front of me so I can see them every day when I sit down to my computer. I need to start working on stuff to get them done so I can do the things I want to do. Hard isn't it?

I'm saying goodbye for now and I'll be blogging soon with updates. Hopefully :))

Posted by Kati from Kati's Quilting at 8:25 PM 6 comments: