I'm glad you're back! If you're a new reader, welcome!
I finished another Craftsy block yesterday, this one was for September. I was really looking forward to the curved pieced blocks, but then when I had to sew them I wasn't as enthusiast as I expected. I was so excited in the beginning because I wanted to try my curve master foot which I bought a few months ago, but never tested. I have to say that I'm not impressed at all. The videos I watched about it made it look so easy! Yet when I got to sew the curves the fabrics moved away from the edge resulting in a too narrow seam allowance. They didn't  butt up against the foot's edge. I decided to ditch the foot and follow Amy's method of making the units. That resulted in about  an hour of pinning of the 16 curves and then sewing and re-sewing most of them to get a narrower seam allowance. All in all I can tell it will not be my go-to block for sure :) I'm trying to find excuses already how to avoid making the second block for September which is basically the same technique, same amount of squares, but in a different arrangement. I'll probably get to it once I get over myself :)
I took a picture of the block I finished, a little different than Amy's, but the same concept. 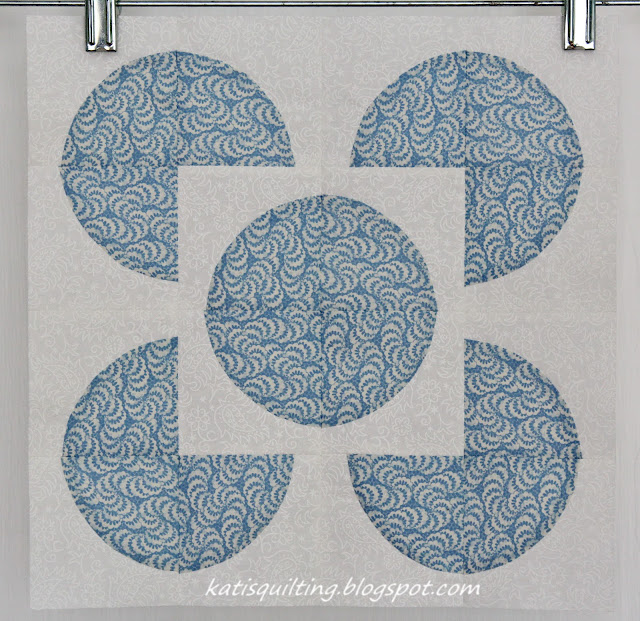 Doesn't it look like a pretty flower? I love this look! When I started to arrange the squares they reminded me of Mickey Mouse :)
This weekend I'll be probably working on piecing the back for this Monkey Quilt: 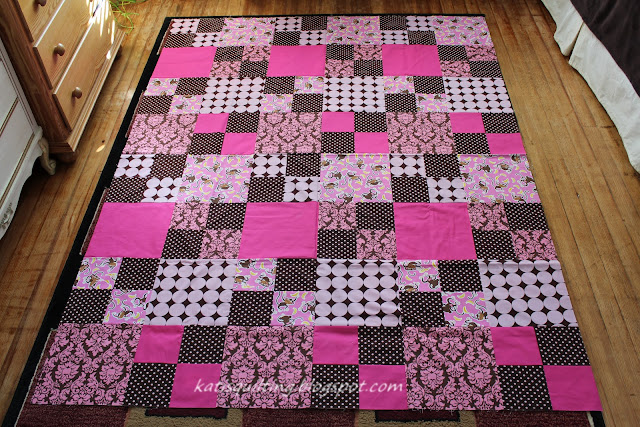 Yes, as  I looked at the picture I realized I could've arranged the squares so the polka dot 4 patches would face the same direction, but guess what? I will not take this quilt top apart! I am thinking if I should put a border on it? What do you think?
I'm linking up to WIP Wednesday @ Freshly pieced
I'll be signing off now because I just can't keep my eyes open :)

Hey Everybody, I'm glad you're here!
Are you ready? Sitting down? Guess what? Tattatadaaaah :)  My log cabin quilt is FINISHED. Yes. :) The second finish this quarter so I'm happy I'll have something to post in the end of September at Rhonda's blog.  I  named it Scrappy Barn  Raising since that's the pattern the log cabin blocks form. And it is scrappy alright :)
I used the thickest batting I could find and I swear it weighs at least 10 pounds :) I've never made a quilt this heavy in my life. For the record, it's the largest quilts I made  to date. At times I had difficulties  moving  it under the machine, but I managed. If I wanted to put it on our queen size bed it could've been bigger. It measures about 70x90 inches. I did the binding by the machine because somehow I feel like machine sewn stuff lasts longer even though I love to do the hand sewing at the end. Which as a matter of fact I did. I usually leave the thread tails long when I do the quilting and tie the 2  threads  together on one side (mostly the top) then after binding I just  hide the threads between the layers by pulling the knots through.
I went on the JoAnn website  the other day and noticed that they sell batting by the  yard now. I decided to  get  wool batting next time just to try it. I'm not sure if I'll use a high loft batting again in a quilt this size. The sad thing is with all the quilting it's not even that puffy. Pfff :)
I took it outside this morning to snap some photos before washing it. My 6'4" Fiance had to stand on a small ladder to  hold it up so the bottom doesn't sweep the ground.
Following are the pictures, enjoy! 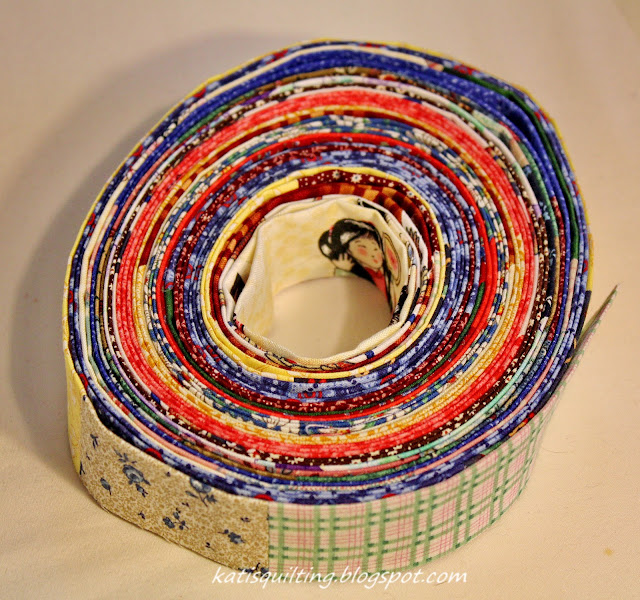 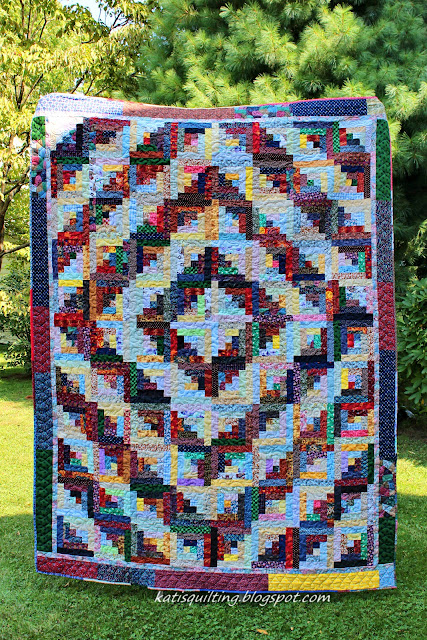 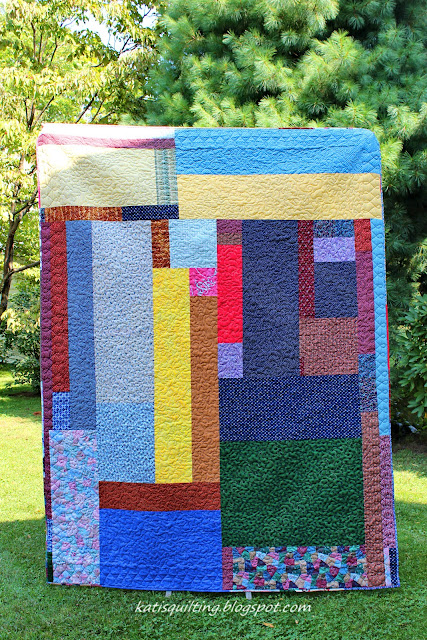 Close-up of the back quilting: 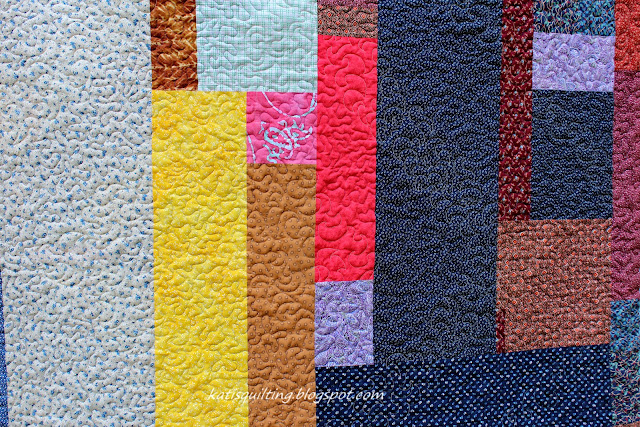 Close-up of the border quilting: 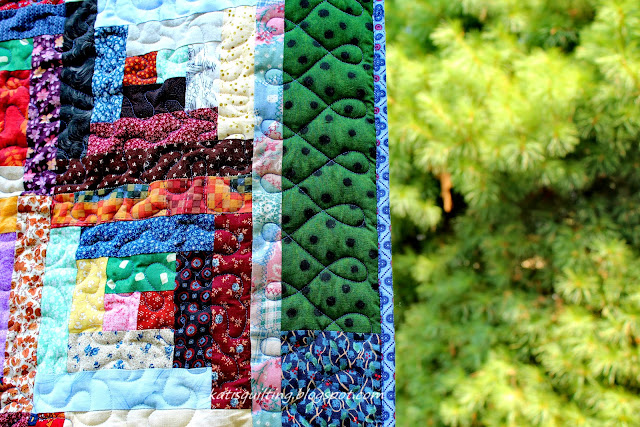 My helper who made sure that I took some breaks:

I made another Craftsy BOM letter block for another friend's baby: 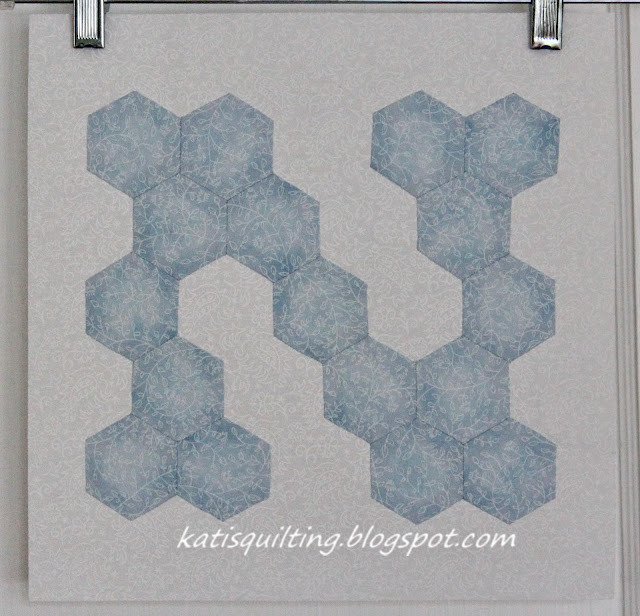 Finally I baked some bread using the recipe from Robin's Quick French Bread recipe. She directs to proof the dough for 15 minutes, but I found that the bread comes out too dense. I proofed it for 30 minutes (in the microwave as She advises), then kneaded it and proofed it for 30 minutes more. It came out perfectly. I divided the dough and instead of baking 2 loaves of bread I made some rolls of the second half. 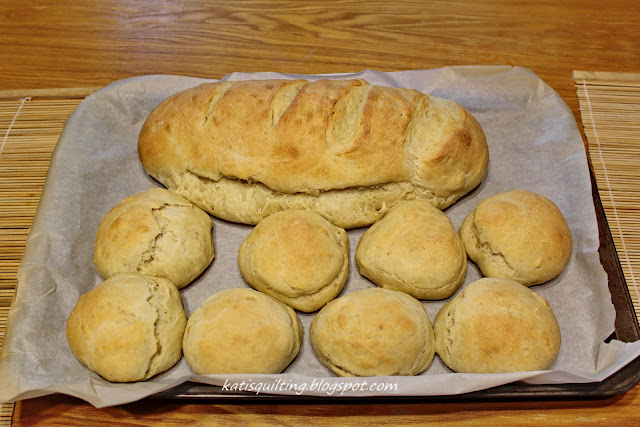 This is it for tonight, I'll be linking up with Sew and tell Friday, Can I get a WHOOP WHOOP?, Show off Friday, TGIFF, Handmade parade @There and Back, Fabric Tuesday @Quilt Story

Thanks for stopping by and don't forget to check back to see my after-the-wash pictures! :)