Presenting my first finish for the First Quarter FAL 2013:

I started this project on May 2nd, 2012. Listed it in several FAL posts, but somehow it always got overlooked. Do you remember what it looked like? 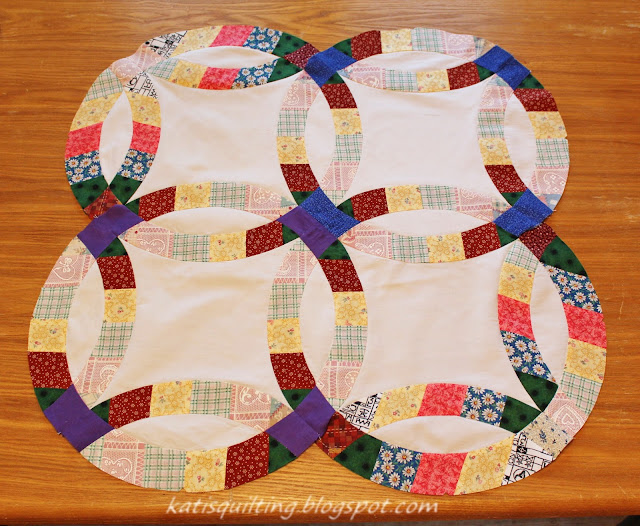 It's a little wobbly because I used my less quality fabrics and I believe the white was a sheet from my friend. I knew I will not make a whole quilt out of it, just wanted to try what it looked like if I strip pieced the fabrics and used the large curved templates as opposed to cut out the individual patches one-by-one. It doesn't look bad, but will try the patches anyway.
As some of you know I signed up for Leah Day's class Free Motion quilting a sampler on Craftsy with the intention of getting an idea of how to quilt my  blue and white baby quilts. She  had these  3  patterns I liked and wanted to practice so that's what I decided to use.

So here are the finished pictures after washing: 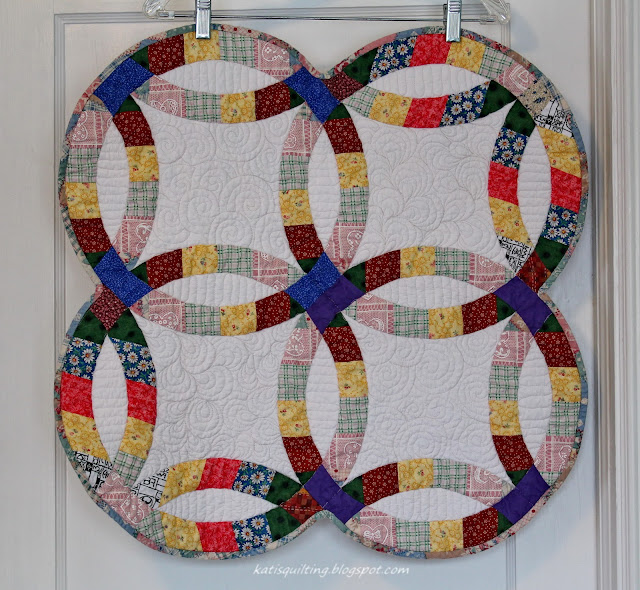 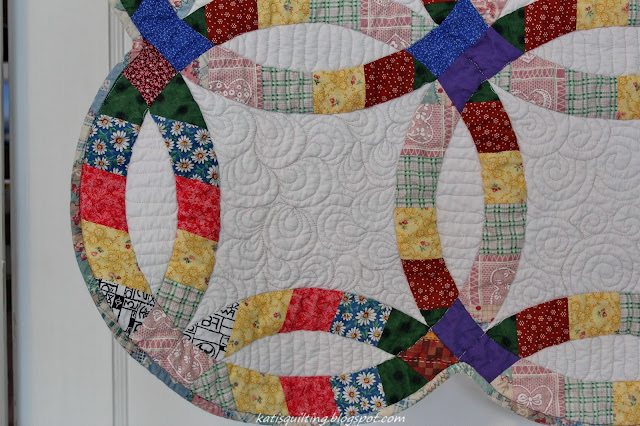 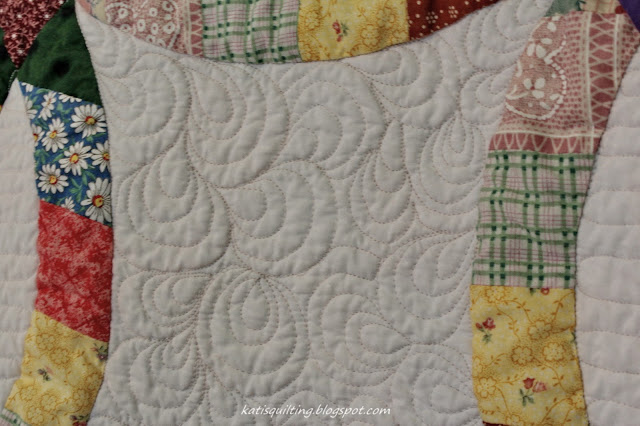 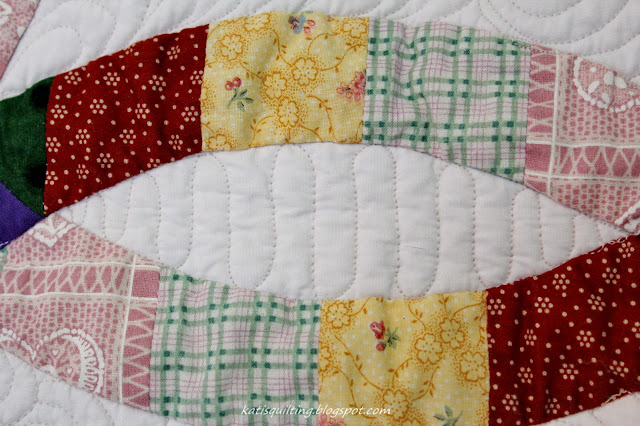 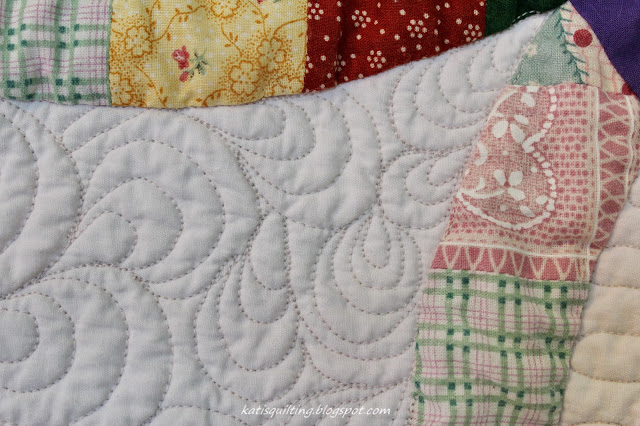 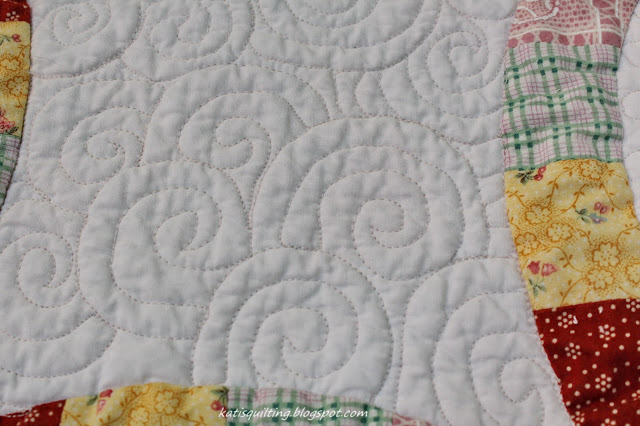 That's all for now, I'm in the process of deciding what pattern to use on the blue-white baby quilts. Stay tuned! :)

Hi  Everyone,
I've been away from the blog because I don't have much quilting progress to report. Except that I'm still on Easy Street, have all my patches done and finished sewing all my "B" blocks together. I  still have to make 7 "A" blocks, and 3 set-in triangles. Sigh... I'll get it done eventually. Right now I decided to take a short break.
This weekend while we had Winter Storm Nemo howling through dumping 15 inches of snow on  us I finished basting my Baby Boy  Blue quilt tops. Yes, both of them! I only have phone pictures, but they'll have to do for now. By the time I was finished I ran out of safety pins. I'm not gonna say I had just enough because I could've used a few more for safety, but it's alright. 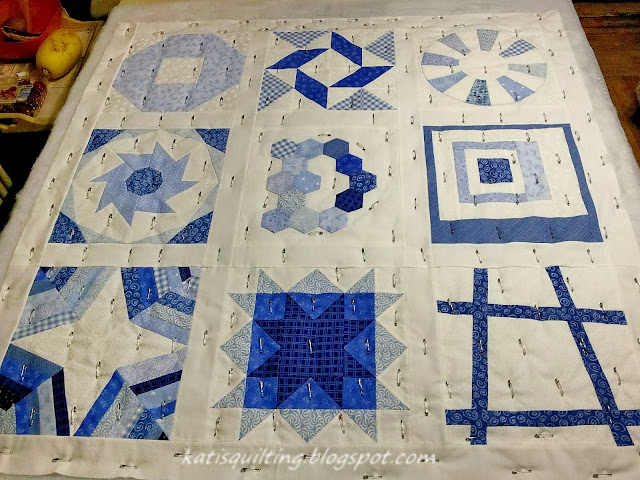 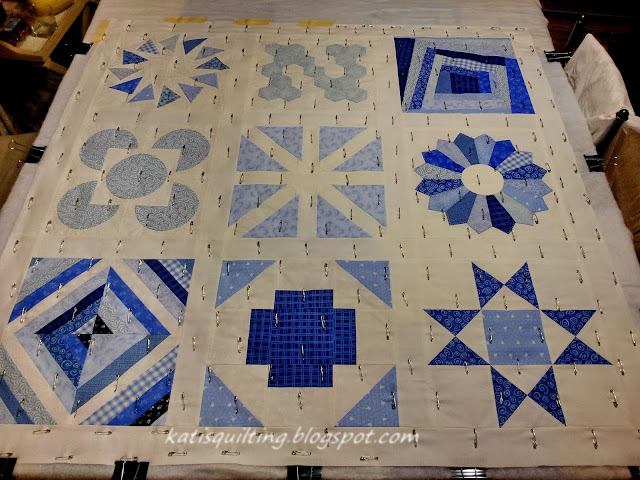 While I was basting the boyz were hanging out on the futon next to me. Guess what were they doing... 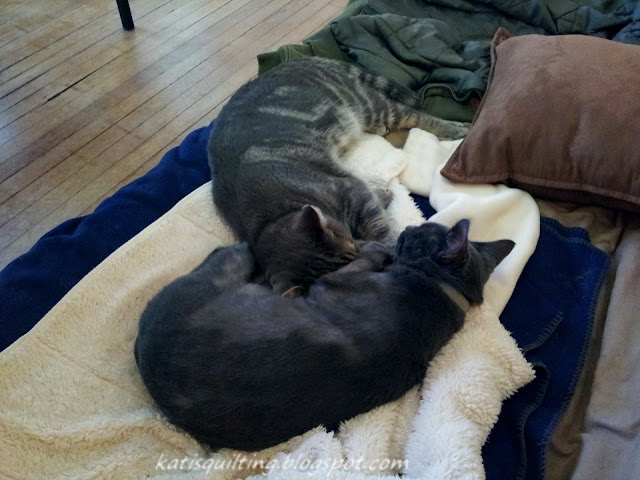 As some of you  know yesterday we went for a hike in the afternoon with a goal of taking some pictures of the sunset from the top of a hill that's about 3 miles from our house. It never occurred to me that the snow will be knee deep (we got 15 inches of it, hello?) and only had sweat pants and an ankle high pair of boots on with ankle socks. Clever, isn't it? By the time we got half way up the hill my ankle was frozen from all the snow and so was my shin. I just couldn't feel my legs! So we turned back and marched home defeated. I have to mention that it was almost 5:30 and we were late for the 5:23 sunset anyway. I saw no point of continuing.

We took the kitties outside this morning and have some pictures of them enjoying the snow too :) 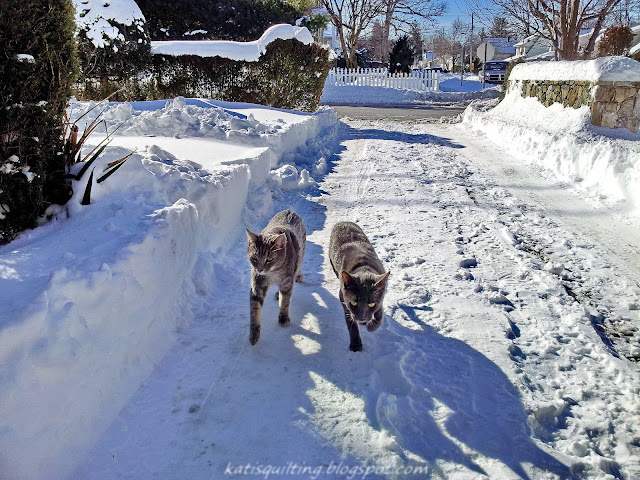 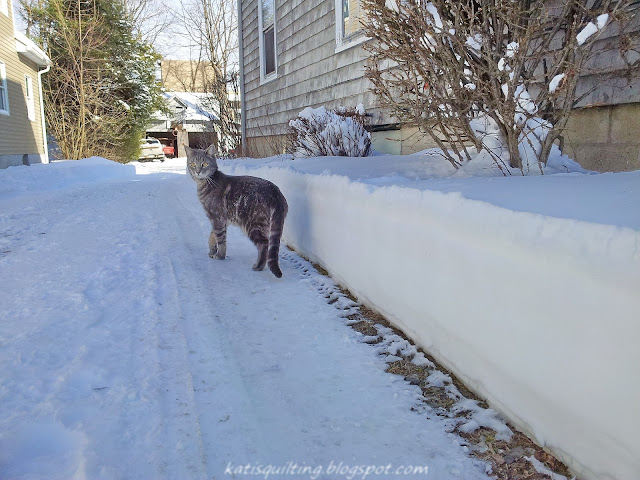 His Royalness is so serious! 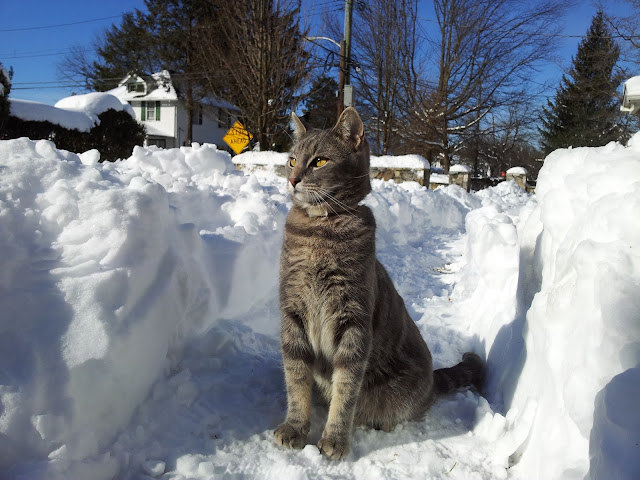 Notice that he's sitting on TOP of the snow! 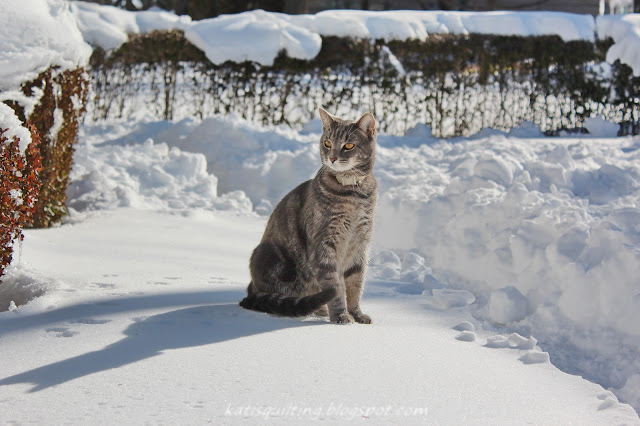 The 3 brothers from left to right: Grumpy, Gandalf, and Furry. They have the same mother as Sleepy. 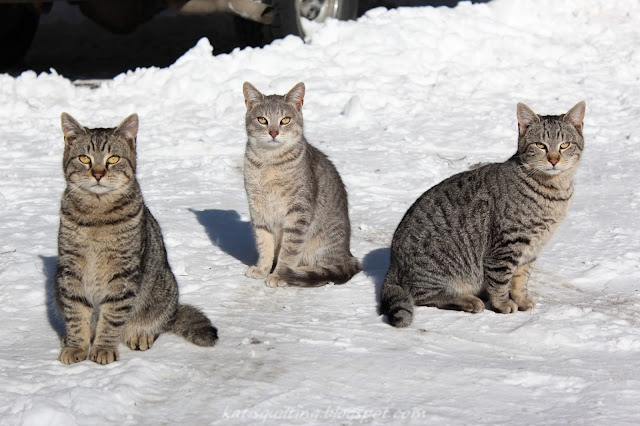 Attention, the snowball is in the air! :) 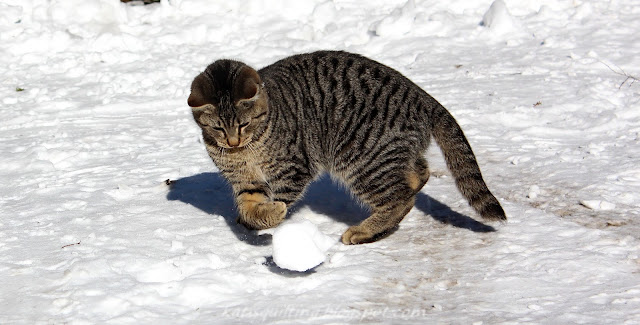 In the afternoon we went out to the park to look around and decided to take the hike again with the modification of taking the car up  to the park and just climb the hill which was about half a mile long. I was still sore from yesterday and was really glad Fiance decided to drive there this time. I was still having a hard time trying to balance to step into his footsteps to get the least amount of snow in my boots as possible. It was fascinating that no one, but us were there since last night.

The ducks were having a blast at the park: 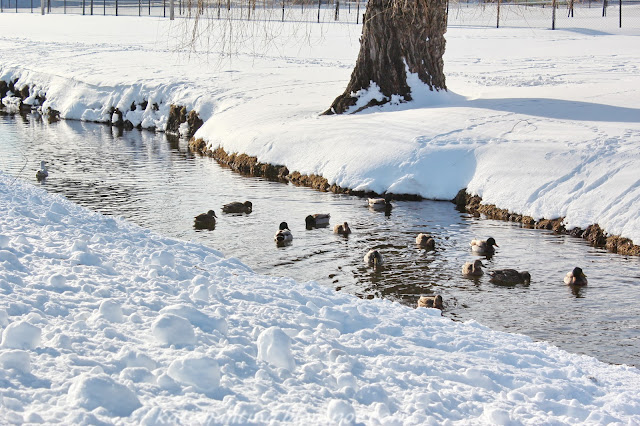 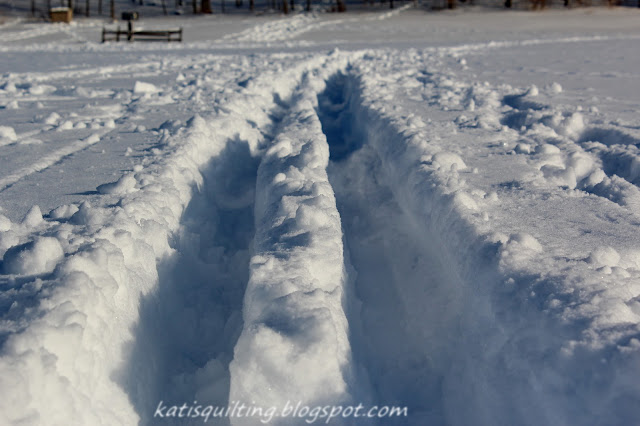 The  view from top of the hill: 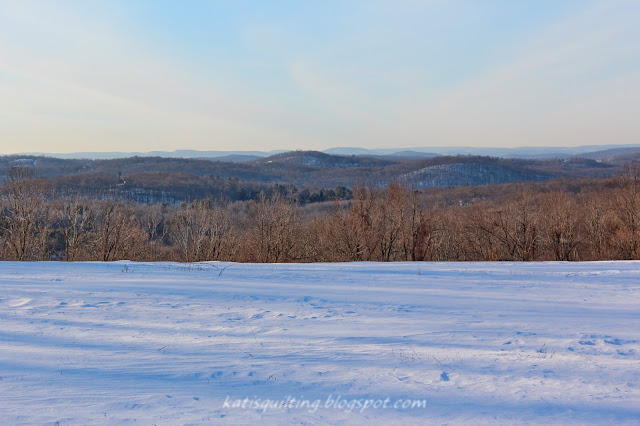 Cool ripples made by the wind: 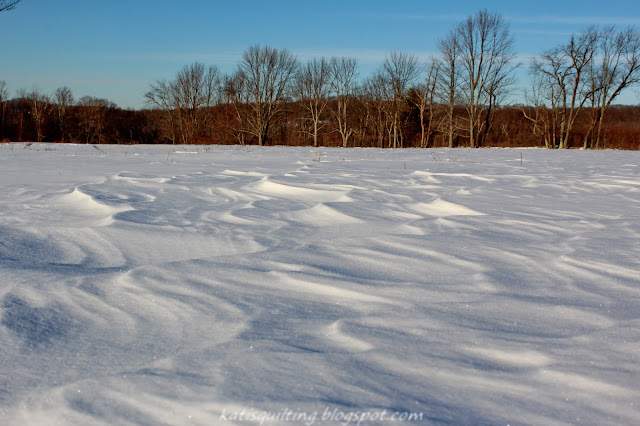 Love the way the sky looks! 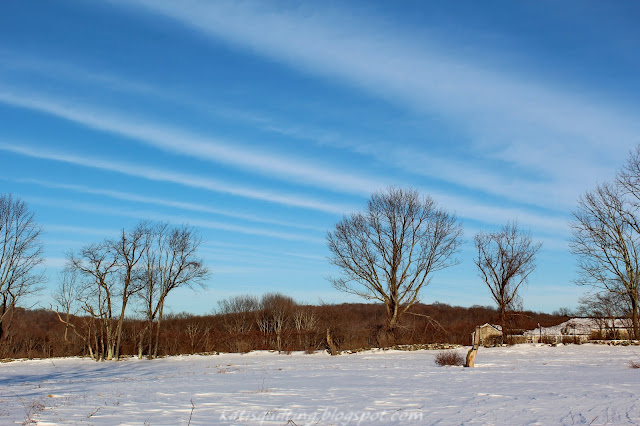 Now I think I'm done for the day :)
I'll be back with the questions answered part 2, but right now I can't even think straight.