Log cabin quilt basted and in the process of quilting

I'm on a roll, baby! Although I won't say "ain't no stopping us now" just yet :) I got  down on all  4-s 2 days ago and basted the largest quilt I've ever done up to now. It took me a good 3 hours and had to crawl all over the top because of lack of space. Oh, and did I mention I had to buy more  basting pins? Lucky we had to go  to Walmart to get water filter and we passed the craft section  on the way in. I picked up 3 boxes of 50 of the basting pins. I had what I thought a huge amount already and let me just say it adding the 150 freshly bought was hardly enough. I could put about 20 more in into one of the corners in the border, but I decided to start quilting regardless and  as I remove pins where I'm quilting, I'll put them in where they are needed.
Fiance tried to talk me into having 2 layers of extra high loft batting which I was OK with first. I just wanted to make a test square about 6" to see how it quilts up on my machine. Needless to say that I could hardly put the basting pins through all the layers. I thought to myself, there's NO WAY I will baste a quilt that size like this! Regardless, I tried to quilt the test sandwich, but had the frustration of skipped stitches again. I had a larger spool threaded and it was moving too much. I tried to put a straw on the thread holder and put the spool on it like that, but was still moving. Finally I decided to try a different way. I got a mug  and placed the thread inside, putting a basting pin through the straw on top of the machine and pulled the thread through the circle part of the pin. ARGH, it still skipped stitches. The last thing I tried was just out of frustration. I put the spool back on the holder with the straw still attached and left the basting pin hanging on the thread to add some weight. It worked like a charm! I knew the reason for skipped stitches was that the spool was moving while the thread was unwinding (I only have and upright position on my vintage machine and this type of thread is cross wound which means it would work best with a horizontal spool holder) and I had the thread loose at times and that's when the machine decided to screw up. Now I have the small basting pin hanging and problem is solved! I was so desperate that my Fiance suggested to buy more Sulky thread, but I have so many newly bought thread and I didn't want to waste those. Not that I don't like Sulky, but I would need to spend a lot of money to buy the colors I need.
So Today was the day I started the quilting. I did Angela Walters' swirl pattern in one of the corners just to realize that it's too dense for this quilt. It came out pretty good compared it was my first time trying this pattern. I will not take out the stitches and that corner will be stiff :)
I'm using neutral thread for the light areas with kind of a spiky quilting and dark gray thread for the dark areas with a large meandering pattern. 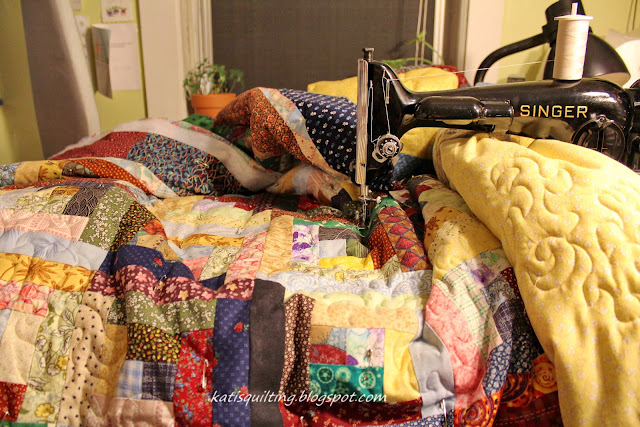 Now I've got to go back to finish the light half of it :)